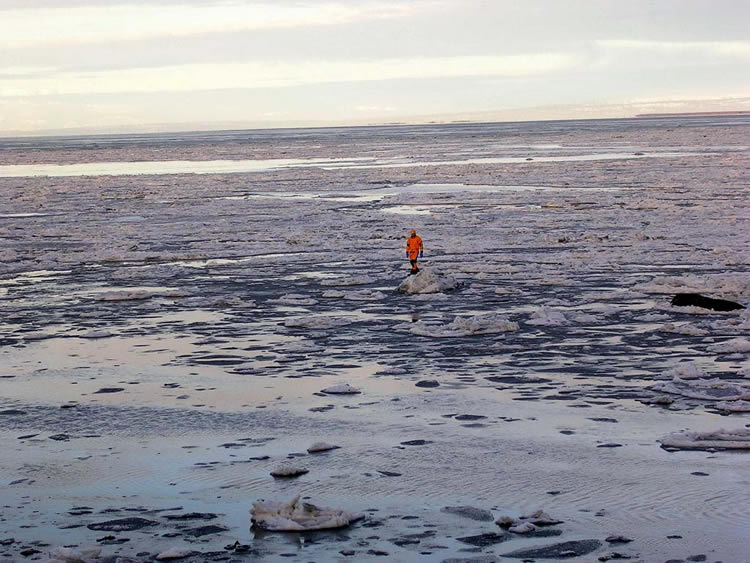 Greenland Icecap, January 2005
Guiding and shakedown trip for the Bering Strait Odyssey. This was a rewards expedition for Corporate Executives from Belgium as a result of a sponsorship contest. With Dixie Dansecoer, camera crew, and six executives.

Bering Strait Odyssey. Wales, AK March 2005
Attempt with Dixie Dansercoer to do a double back crossing from Alaska to Russia. After 8 days and being pushed 60 miles south into the Bering Sea, we call for a pickup. A forecasted storm and our inability to counter Mother Nature’s whims convince us to abandon this attempt.

Sailing expedition to Antarctica with Dixie Dansercoer, Pieterjan Kempynck, Michel Tudoir, Laurent Dick, Rumen Grozev, and Frans Doomen. In honor of Gerlache's Belgica expedition of 110 years ago.  Successful replication of the same landings as the original expedition as well as comparing imagery and weather data from past to present day. Successful explorations of the Antarctica Peninsula as well as ascents of four peaks in the area.  On this expedition Troy made history by becoming the first person to Kiteboard in Antarctic waters. See www.IntheWakeoftheBelgica.com for the full report.

Guiding expedition to the Fjord-lands of northern Iceland and a 5 day traverse of this icecap and the surrounding area. Shakedown trip for a group of 10 on a quest to reach the North Pole via the Last Degree in 2010.

Last degree guiding expedition to the North Pole with 2 Americans and 9 Belgians.

Click here for the latest video by Beeldharing Production House.

Click here for Doug in the news in Oklahoma.

North Expedition 2018
An audacious start to a total crossing of Alaska using kites. This leg was an attempt to get from Shishmaref to Nome via Serpentine Hot Springs. A solo attempt which found me covering 55 miles to Serpentine using kites. After -20F ambient temps and -55F windchill, and full on arctic storm conditions, I turned back abandoning the expedition for this year. Several other expeditions on the Seward peninsula wisely turned back as well.